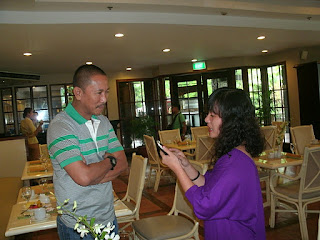 July 12, 2011- Davao City, Still sleeping but can hear already the news on TV from Dzmm Teleradyo with the lawyers of both the Ampatuan and Mangudadatu sides
news about the suspended ARMM Governor Zaldy Ampatuan surprised everyone for the willingness to testify against his Family for the Maguindanao massacre also known as the Ampatuan massacre (named after the town where the mass graves were found), which happened on the morning of November 23, 2009, in the town of Ampatuan province, on the island of Mindanao, Philippines. Fifty eight victims were on their way to file a certificate of candidacy for Esmael Mangudadatu, then vice mayor of Buluan town, they were kidnapped and brutally killed.


Who would forget that faithful day? The Filipinos were stunned and with combination of anger and rage over what happened to 58 innocent people who were killed because of greed over power. People were killed with the help of government machines like back hoe which is according to the dictionary, Two days before the incident, the mass grave was prepared using a backhoe emblazoned with the name of Maguindanao Gov. Andal Ampatuan Sr., and apparently owned by the Ampatuan family. 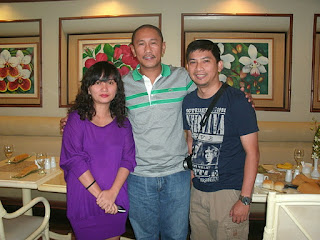 When I approached the Governor, he had a ready smile. His built is fair, dark but almost everyone are greeting him. He doesn’t have uniformed bodyguards around or even beside him. I took the opportunity to interview him with regards to the current issue surrounding the event, which is under the Supreme court right now and surrounded with many controversies. 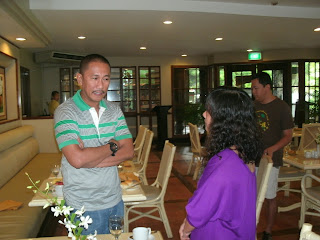 Governor Esmael Mangundadatu is at Waterfront Insular Hotel and Casinos today and answered three brief but important questions for Blogwatch.

B: Any comment about the media were the Supreme Court allowed the hearing to be live on TV?

B: Any comment about the news today with regards to the suspended ARMM Governor Zaldy Ampatuan that he is willing to testify even agaianst his relatives?


B: Any comment about the justice system under President Noynoy Aquino?

Gov. Mangandadatu:” We are happy for what he is doing from the start.

For info on what really happened two years exactly right now, November 23, 2011. From the internet.

Buluan Vice Mayor Esmael "Toto" Mangudadatu invited 37 journalists to cover the scheduled filing of his certificate of candidacy (COC) at the Commission on Elections provincial office in Mindanao.

He said reports had reached him that his rivals had threatened to chop him into pieces once he filed his COC, and felt the presence of journalists would deter such an attack.

A local report stated that at about 9:00 AM, a convoy of six vehicles carrying journalists, lawyers, and relatives of Vice Mayor Mangudadatu left Buluan to file his COC at the Comelec office in Shariff Aguak. The convoy was composed of six vehicles: four Toyota Grandia vans (one grey, one green, and two white) owned by the Mangudadatu family; and two media vehicles – a Pajero DZRH, Mitsubishi L-300 van owned by Grandia boarded by mediamen, but it lagged behind and decided to turn around once the passengers sensed what was happening. There were two other vehicles that were not part of the convoy but happened to be traveling on the same highway: a red Toyota Vios and Toyota Tamaraw FX.

The Vios had five passengers: Eduardo Lechonsito, a government employee who was bound for a hospital in after suffering a mild stroke Monday morning. He was with his wife Cecille, co-workers Mercy Palabrica and Daryll delos Reyes, and driver Wilhelm Palabrica. The FX was driven by Anthony Ridao, employee of the National Statistics Coordination Board, and son of Cotabato City Councilor"

Before reaching its destination (about 10 km from Shariff Aguak, four on other versions), the convoy was stopped by 100 armed men, who abducted and later killed most or all of its members. There is evidence that at least five of the female victims, four of them journalists, were raped before being killed, while "practically all" of the women had been shot in their genitals and beheaded.

Mangudadatu's youngest sister and aunt were both pregnant at the time of their murders.

A text message sent by Mangudadatu's wife to him, she identified the people that blocked their way as the men of Ampatuan Jr, and that he himself slapped her. The female victims were shot in their genitals, according Agnes Devanadera.

According to Mangudadatu, his wife's "private parts were slashed four times, after which they fired a bullet into it." In addition, he said that "They speared both of her eyes, shot both her breasts, cut off her feet, fired into her mouth." A backhoe located in the immediate vicinity of the carnage at Ampatuan town was identified as the instrument that was used to expediently dig the graves of the victims, including the vehicles. The perpetrators weren't able to complete the job when a helicopter was spotted in the area. The backhoe, emblazoned with the name of Maguindanao Gov. Andal Ampatuan Sr., was later identified to belong to the Maguindanao provincial government.

As of November 25, the death toll had risen to 57, as confirmed by Chief Superintendent Josefino Cataluna of the Reporters Without Borders announced that at least 12 of the victims were journalists, making this the deadliest such incident in the history of news media.

The National Union of Journalists in the Philippines originally estimated that a total of 20 journalists were killed, including an undisclosed number of NUJP members. Philippine Daily Inquirer later updated the number of journalists killed to 34.

Gloria Macapagal-Arroyo responded to the news of the massacre by declaring a state of emergency in Maguindanao, Sultan Kudarat.

Prospero Nograles called on the police to quickly identify the perpetrators of the massacre and disarm private armies.
The Philippine Department of Justice created a panel of special prosecutors to handle cases arising from the massacre.
Posted by Engr. Grace Bondad Nicolas at 5:42 PM