When Gerry Ortega an environmentalist has been murdered and a good friend of Father Roberto Reyes, the priest decided to run as an advocacy to give awareness to the Filipino people about the need to love the environment by saving the forest, mountains and to become concerned about  Human Rights of everyone such as the environmental killings. “Takbundukan” Takbo para sa kabundukan” is the latest journey from Manila to Mount Makiling (Los Banos, Laguna) also with runners from Department of Environmental and Natural Resources (DENR) and members of Earth Day Network Philippines (EDNP).
Father Roberto “Robert” Reyes is encouraging all Filipinos to see the importance of spending time in the mountains rather than in the mall. He said “Instead na mag Mall, mamundok.”  He also said that most Filipinos don’t love the environment and nature. DENR Secretary Ramon  Paje said the advocacy run is also in conjunction with the observance of Proclamation No. 125 issued by President Aquino on March 15 declaring 2011 as the “National Year of Forests” in support of the declaration by the United Nations of the year 2011 as “International Year of Forests” with the theme: “Forests for People.” 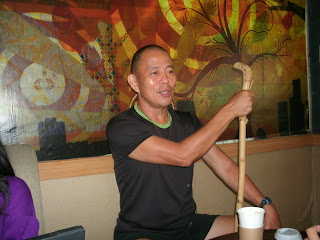 Every 24th of the month, Father Reyes is making sure that he is spending time with his family and people of Palawan, this is for his advocacy and to spread awareness about the environmental killings in which he said that because lot’s of powerful backers from the government and even the Catholic Church a lot of officials cannot do anything about it, he said that “Bishops or priest are humans only, pag binigyan  na ng free hospitalization, may utang na loob na sa mining corporation.”
There are 350 Mining applications so far that was cancelled by President Noynoy Aquino and even ABS CBN Foundation Gina Lopez is gathering a 10 million signatures to stop the mining in Palawan. Father Robert Reyes is well known as the running priest in the Philippines and encouraging everyone to have a more positive approach in dealing with life everyday. 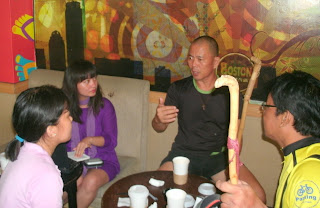 Everyday, Fr. Reyes have a soil in a bottle, seeds and his bamboo cane to show to everyone the importance of nature. From U.S News Las Vegas, The three-day run from June 6 to 8 started from the DENR central office in Visayas Avenue, taking the Manila-Pasay-Las Pinas-Muntinlupa route to reach Laguna province passing through San Pedro, Binan, Sta Rosa and Calamba cities culminating at the University of the Philippines at Los Banos (UPLB) where tree planting of “Balakat-gubat” (Balakata luzonica ‘vidal’ Esser), an indigenous tree species thriving in Mount Makiling, was participated in by the UPLB academe community and DENR-Region 4 officers and employees headed by Regional Executive Director Nilo Tamoria.
As a Pilgrimage to the Mountains which is why father Reyes is doing what he is doing. He said that our Nature is sacred. Lastly he said that  “Ang tingin sa kalikasan (Ng ibang tao), a commodity very materialistic and that is lost of faith, we can go to church but without love in environment, it will be like an atheist, you cannot love Mammon (Money) and God, Mammon is slavery to material things. Mall start wt letter of M, money starts wt letter M, Mammon start wt letter M.” He also said that he wants to connect those people in the mainland to go to the mountains and that most kids from Manila “ ay hindi pa nakakahawak ng lupa (soil). This run is a Nationwide campaign. When asked if may kinalaman ba ang mga politicians sa environmental killings he said “yes” because the masterminds are very influential in the society. He said that they control the courts and a large number of judges down to Regional Trial Court can be bought and that so far 128 Environmental martyrs has been murdered since Martial law.
He said that because he was jailed before in Manila for 60 days due to his political involvement, the bishop of Hong Kong excommunicated him. When he went back to that country, they didn’t allow him to do the Mass and asked him to vacate the room where he stayed before. He said that because of the controversial Reproductive Health Bill that is the hottest issue right now with respect to the involvement of the Catholic Bishops of the Philippines, The Bishop are so focused with the issue rather than environment which he thinks needed to have an attention too and that some priest have close ties with the mining business and mining corporations. 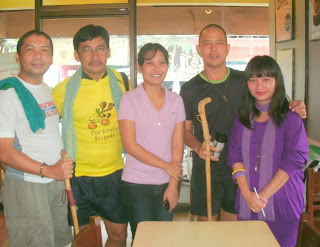 Posted by Engr. Grace Bondad Nicolas at 7:50 AM