He is from Southern Luzon State University, John Arvin Pastores is 19 yers old and a graduating fourth year college student taking up food technology. He is in Caluuan, Laguna together with his classmates doing On-the -Job training at Hacienda Macalauan. He came all the way from Lucban, Quezon. His mother is an accountant and his father manages their grocery store. 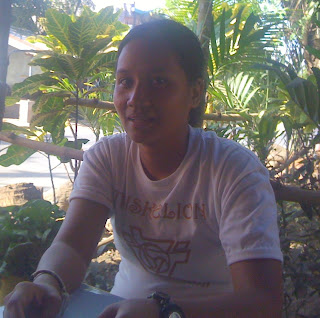 Monarissa Barcelon from Barangay Mabacan, Calauan, Laguna is 20 years old, Single, Highschool graduate with two siblings. Her mother is working abroad while her dad stays at home taking care of the household. Her dad was a college graduate while her mother reached highschool. Her two sisters are both studying, second year in college and first year in highschool.

She doesnt have any idea about the Reproductive Health Bill, No idea who Carlos Celdran is even the word Damaso. They have TV at home and Newspapers are available in the market. She is not watching any news. She belongs to a Tau Gamma Sigma group with more or less 50 members and she is the secretary. Just like her mother, she is also a highschool graduate and as of now doesn't have any work. She is not continuing her studies because her two sisters are also studying and the money sent by her mother abroad is not enough to support all of them.

From her, Condom is not a sin and pills because its a way of family planning. She is a non practicing catholic. If she will get married, she just like two children because of poverty. If she will have a chance to go to school, she likes to take Hotel -Restaurant and Management. 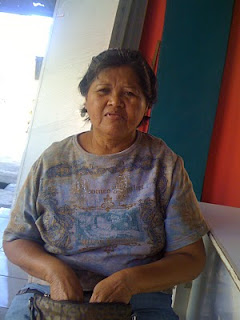 54 years old Belinda Mercado Santain from Barangay Lamot 1 earnes 250.00 a day from her "paglalako ng kakanin".  Her husband, a trike driver earns 300.00 pesos daily. they have two children ages 14 and 18. She have three siblings and her eldest sister have 9 children the same with her brother in law with 9 children.
The combined salary is not enough for them because they are also renting an apartment for one thousand pesos monthly excluding the electricity. She got married at the age of 32.
Posted by Engr. Grace Bondad Nicolas at 6:46 PM